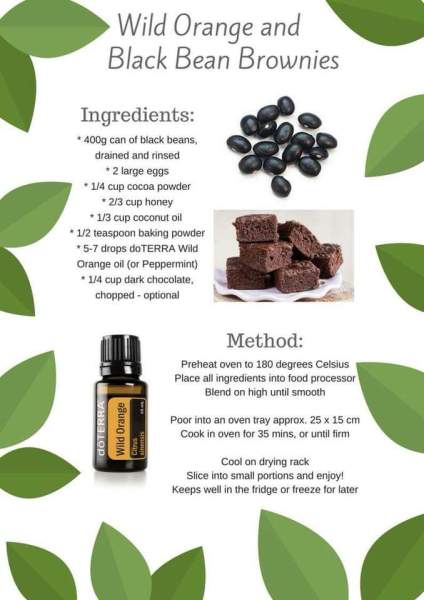 I cheated on Grandma with black bean brownies.

My Grandma was an excellent cook. She did a lot of it, with having six kids and all the grand kids coming to visit. My favorite was her butter beans. That was back in the day when most of us ate locally. Food was locally grown and locally consumed. So maybe it didn’t take a lot to be a good cook back then. Perhaps the ingredients were so good that all one had to be was competent and the food tasted delicious every time.

I think she cooked some stuff from a box – maybe a cake now and then, but I also remember her making most of her desserts from scratch. She made it look so easy. I had no idea…. As a kid, I guess most of us don’t have any idea.

I grew up with a lot of activity in the kitchen, and still to this day the kitchen is my favorite room in the house. I like cooking, but I’m getting off topic. Sorry about that, but those butter beans.

Forward to the year 2018 and our food supply is very different. Our food travels on average 1500 miles before reaching our plates. Wheat used to grow eight feet tall. Now it’s around four feet tall and the varieties are minimal. It is a little off topic but did you know that it is now common practice to spray wheat crops with a chemical that makes it brown faster so the big farmers can harvest it sooner thereby getting to plant the next crop sooner? And that wheat goes into our brownies – chemicals and all.

Thank goodness for good innovative cooks because they are experimenting and finding new ways to use food that hasn’t been debilitated to the point of causing dis-ease.

Enter black bean brownies. As you can see in the recipe, there is no flour.  Experimental cooks – or food innovators – have discovered alternatives.

So. I made these. I actually doubled the ingredients because one can of beans just didn’t look like it was going to make many brownies. I’m used to have a pan of brownies for a couple of days – not something that I’m going to eat it all at one sitting. So I doubled the recipe. And of course the cooking time was about 10 minutes longer. No biggie. I just kept checking it by inserting a butter knife into the center. When it came out clean, the brownies were done. 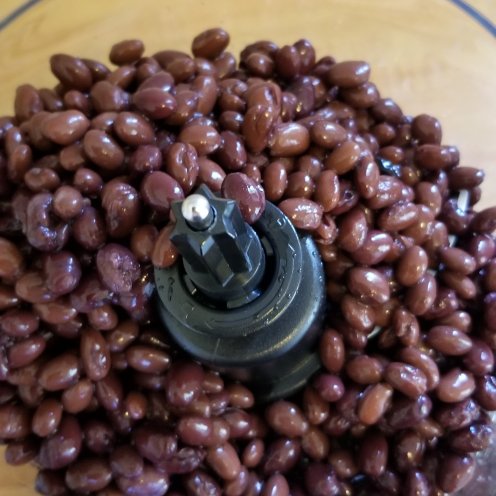 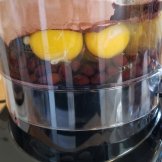 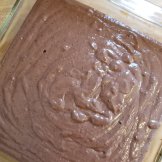 I added extra chocolate chips – dark chocolate. Next time I will add them after blending.

These look a bit dry don’t they? But they aren’t. They would be if this was made from flour but fully cooked beans aren’t dry, so neither were the brownies.

And since I’m complete obsessed with essential oils, I did this.

After all, it’s in the recipe. And I got this particular recipe from our doTERRA team. Chocolate and orange? Yes!! I only got hints of the orange flavor and it was very pleasant. I don’t believe it was necessary, but there was an added flavor dimension. That’s always nice.

Ok, so this was not only the first time I made black bean brownies, it was the first time I ever ate them. Now this recipe is “healthy” so it used honey instead of sugar. While I was putting the ingredients together, I thought there was a lot of honey in it since I doubled the recipe, so I  didn’t put as much as was called for. I did put about a cup in there though.

My first few bites weren’t sweet enough so I drizzled a little honey over it. Ok, so check – sweetness is there. And the chocolate fix is definitely there. (Have you tried dark chocolate yet? You should!)

The thing that got me at first was the texture. It’s pretty hard to describe but these obviously weren’t my Grandma’s brownies, or even my mom’s…. But since they are healthy – hello black beans – I ate a second one. My brain had gone through the necessary adjustment and it was sweet enough without adding more honey. And this gritty-ish texture was more acceptable.

I wanted to write this blog because we have to change our ways of being/doing/thinking. As much as I love traditional brownies, I deprive myself of them because the processing, the big AG, capitalism, my thighs…..

As I ate the first one, my brain wanted to completely reject the whole experience because it wasn’t anything I am used to. But, I persisted and they became better and better. I still have about half a pan left and my chocolate fix will be satisfied for a few days.

I had to let my mind go through some hops to accept this new way of eating. And it worked. I would ask that you allow your mind to accept new ideas, new ways of being/doing/thinking. Our world is changing. We can change with it – and thrive. Or not.

Are you willing to give black bean brownies a try? Leave a comment.

Check out my.doterra.com/suzannehorrocks for everything about essential oils. Thanks!